adminPosted on February 20, 2016 Posted in Recipes

These north African skewers of succulent seabass are seasoned with charmoula and served over a salad of marinated eggplant and peppers.

Steps
Toast the cumin seeds in a small pan over medium high heat about 2 minutes, until the seeds release their aroma.

Using a mortar and pestle, pound the garlic cloves, cumin seeds, and a pinch of salt to a paste. Remove to a medium bowl. Pound the cilantro and parsley in batches. As each batch of herbs is pounded to a paste, add it to the garlic mixture. Add the paprika and cayenne and stir well. Put half the mixture in a large bowl or container for marinating the fish and stir in 1/4 cup olive oil. Gently toss the fish with the herb purée, cover, and refrigerate at least four hours or overnight.

Stir 1/2 cup plus 2 tablespoons olive oil into the remaining herb purée. Add the rice vinegar, lemon juice, and 1/2 teaspoon salt. Taste for balance and seasoning and chill. Bring to room temperature before serving.

Light the grill about 30-40 minutes before cooking. (You can also broil or roast the skewered fish instead of grilling)

Remove the fish from the refrigerator 30 minutes before cooking, to bring to room temperature. Skewer the chunks of fish, being careful that the pieces on each skewer are similar thickness so they will cook evenly.

When the coals are broken down, red, and glowing,
season the skewers with salt and pepper. Grill the fish 3-4 minutes, rotating the fish once, until you have nice color on the first side. Turn the fish over and cook a few more minutes until just cooked through.

Steps
Char the peppers on a medium hot grill, or on the burners of a gas stove, or in the broiler until all sides are just blackened (you don’t want to burn the flesh of the peppers). Place the peppers in a large paper bag, close tightly and let them steam at least 15 minutes on a plate (they sometimes leak).

Meanwhile, cut the stems off the eggplant and slice them into 1/2 inch thick pieces, trying to maintain the natural shape of the eggplant. (Don’t cut them into circles.) If they are very small, cut them lengthwise but if they are bigger, cut the eggplant in half again on the diagonal. Score the eggplant slices with a knife, sprinkle with 1/2 teaspoon salt and let them sit 10 minutes. Use paper towels to blot up the water that beads on their surface.

Heat a large sauté pan over high heat for 2 minutes. Swirl in 2 tablespoons olive oil and wait 1 minute. Carefully place half of the eggplant in the pan. (The eggplant shouldn’t be crowded; do this is batches or in 2 large pans.) Drizzle another tablespoon or 2 of olive oil into the pan and cook 3-4 minutes until golden brown. If the pan is smoking or the eggplant starts to burn, turn the heat down. Turn the eggplant over and cook another 2-3 minutes on the second side until tender and golden. Remove the eggplant to a platter or baking sheet lined with paper towels. Continue until all the eggplant is cooked.

Open the bag of roasted peppers and let them cool slightly. Peel the peppers carefully. Do not run them under water or you will lose all their delicious juices. Work over a strainer set in a bowl to catch the peppers’ juices. Remove the seeds and membranes. Tear the peppers lengthwise along their natural seams into approximate 1 inch thick strips. Set them aside in the reserved juices.

Wipe out the eggplant pan and return it to the stove over high heat for 2 minutes. Add 2 tablespoons olive oil and gently sauté the red onion and thyme about 2 minutes until translucent. Add the garlic, cook a few more minutes, and then add the peppers and their juices to the pan. Season with 1 teaspoon salt and cook 6-8 minutes, stirring gently and often, until the peppers have caramelized slightly.

Remove the peppers and onions to a shallow non-aluminum dish. Add the two vinegars to the pan and reduce by half over low heat. Turn off the heat and swirl in 2 tablespoons of olive oil. Use a rubber spatula to scrape the oil and vinegar over the peppers. Toss well to combine the flavors and taste for seasoning.

Gently toss the eggplant and peppers together. Taste for seasoning. 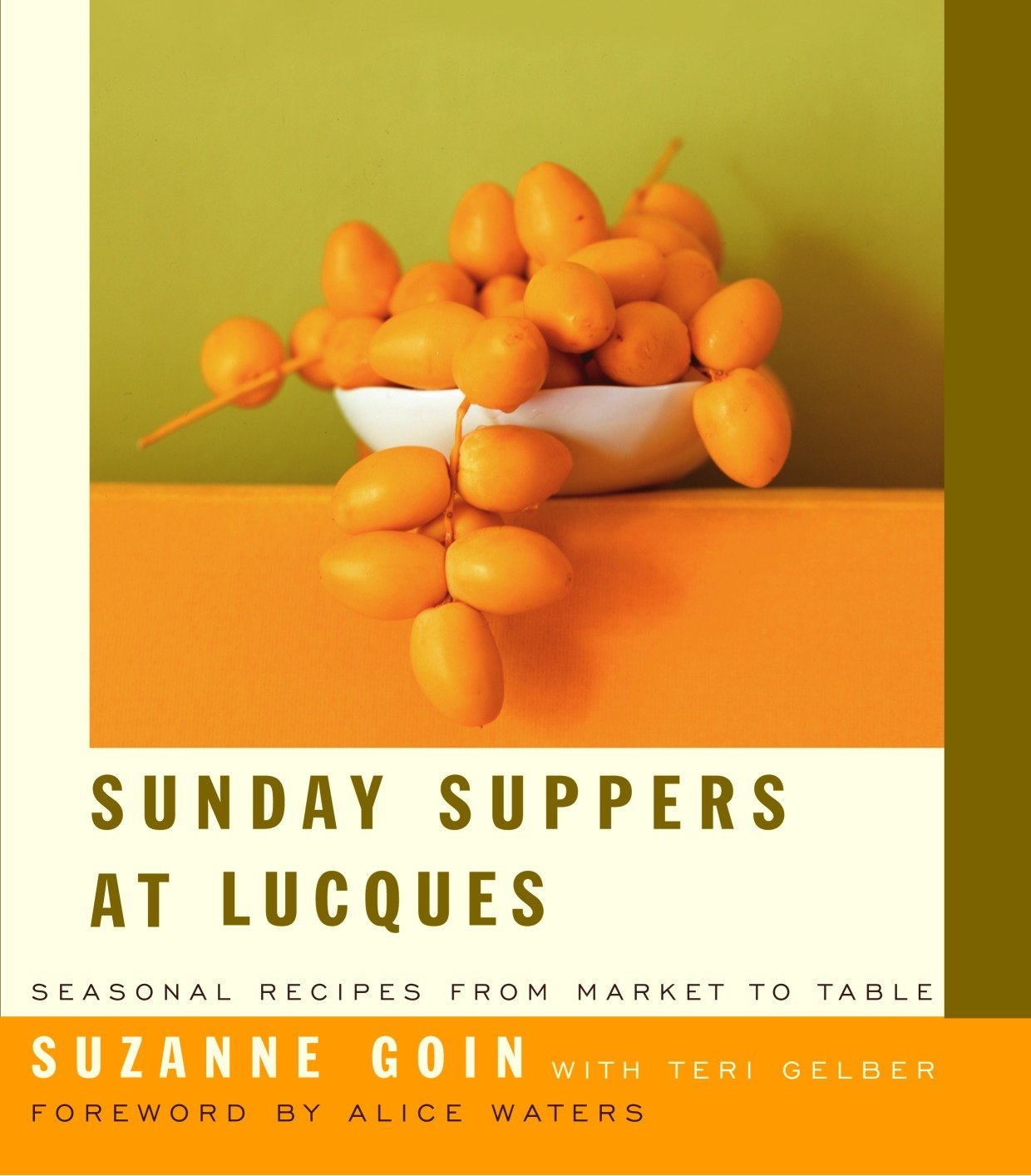 from Sunday Suppers at Lucques by Suzanne Goin with Teri Gelber